WHO WE ARE
My name is Ricardo and now in 2018 I'm 69 years old. Takako, my Japanese wife is 60. We have two daughters. The eldest (Alice) is 38 and the youngest (Elsa) is 32 years old. We live in a big old 2-story German style mansion built in 1922 by my grandfather and surrounded by a 1.85-acre garden with fruit trees. This is where the school is.

I'm a native speaker of Portuguese (which is very similar to Spanish, as you probably know) while my wife is a native speaker of Japanese and speaks English and Portuguese as well. Her Brazilian Portuguese is almost perfect since she has lived more than 30 years in Brazil and has a degree from a Brazilian university. Alice is trilingual. We lived in the U.S. and Japan for several years and since 1987 we have been working in Brazil as English and Japanese teachers and language consultants. I graduated from Arizona State University (MATESL) and my wife has certification in JAFL (Japanese as a Foreign Language) and a degree in Psychology. My thesis was on phonological contrastive analysis between English and Portuguese, and I have also had interest on the teaching of ESL in different countries.

THE SETTING: Santa Cruz do Sul is located about a thousand kilometers south of São Paulo. It is a city of about 90,000 inhabitants with over 110,000 including the country areas. Santa Cruz started as a German immigration center in the 1800s, having become an interesting blend of cultures today.

Santa Cruz tends to be different from the typical images that people have of Brazil. It is prosperous and safe compared to other Brazilian cities. We are 100 miles (160 km.) from Porto Alegre, the largest city, the state capital and the nearest commercial airport. The main economic activity of Santa Cruz is farm production, processing and exporting of leaf tobacco. Other industries are clothing, corn seed production, machinery, and rubber. There is also a small university, however not strong in linguistics.

The cost of living in Brazil is significantly cheaper than in North America and Europe. Santa Cruz is even cheaper than big cities and it might also be a better place to make friends and learn the culture.

CLIMATE: It never snows in Santa Cruz, temperatures vary greatly and some days in winter (June, July and August) are uncomfortable because of rain. The coldest it ever gets in a normal winter is 5 degrees centigrade (41 Fahrenheit), in a usual range of 10 to 20 degrees (50 - 70 F) (sometimes windy). A good jacket is certainly needed. Summer (December through March) is hot and often humid. The highest temperature that it may occasionally reach is 40 degrees centigrade (100 F).

TEACHING METHOD: S&K is a bicultural language living-learning center implementing Stephen Krashen's Natural Approach and acquisition theory. As such, we do not follow any specific plan or course of lessons, but promote language and culture exchange in communicative activities. We emphasize language acquisition through communication rather than language learning through the study of grammar. We believe that language is a result of human interaction. More than any other area, language acquisition depends on natural learning situations. Although the teacher is an authority on grammar and compared linguistics, he/she acts primarily as a facilitator in communicative activities, always focusing on the learner's interests.

For those interested in a more linguistically structured program, we offer an intensive course of private lessons. Classes include conversation, grammar, and pronunciation. In the pronunciation classes, the student will be introduced to Portuguese phonology compared to English phonology. Emphasis will be placed on the pronunciation of nasal vowels and syllable-timed rhythm. The grammar classes will present the differences between English and Portuguese in verb conjugation and sentence formation, including subjectless sentences, double negative words, adjective gender and number, false cognates, lexical ambiguity, etc.

Our teachers are all Brazilian native speakers of Portuguese with college degrees in the teaching of languages and communicative ability in English and Spanish. One of them is a speech therapyst whose classes concentrate in pronunciation accuracy. The school also makes available a Brazilian teacher bilingual in Portuguese and English to help our foreign students with their learning of Portuguese.

Optionally the student can order classes on Brazilian literature, history and geography. Samba and capoeira lessons are also available at local gyms. Cultural traveling on weekends is another important feature of our program. These turismo cultural items are weekend trips to places of interest. For this purpose the school has a comfortable 12-passenger van. The idea is to integrate cultures bringing together foreign students of Portuguese and local students of English in an informal atmosphere with a lot of comprehensible input both ways, so that everybody learns English and Portuguese having fun together. Read here what former participants have to say. 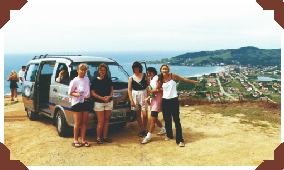 Weekend at Praia do Rosa (Santa Catarina State): Praia do Rosa is the most beautiful and unspoiled beach of the Florianópolis area. This trip includes transportation over 500 km in our 9-passenger van in the company of instructors, a visit to Garopaba, and a 2-night stay in comfortable little huts on the beach. Excellent and cheap seafood. Portuguese is spoken all the time. Read here personal accounts of this tour. 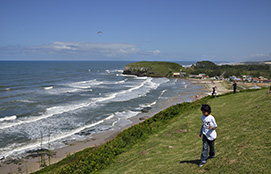 Weekend at the beach of Torres (Rio Grande do Sul State): Torres, 360 km away, is the most beautiful beach in the state of Rio Grande do Sul. This tour includes transportation in our van in the company of instructors and stay in a cheap and comfortable hotel with panoramic view over the beach. Torres has a selection of restaurants that serve excellent seafood. Portuguese is spoken all the time. 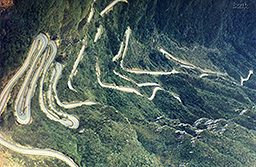 Biking down the mountains at Serra do Rio do Rastro (Santa Catarina State): Up to 4 bikes can be loaded in the school van. A 400-km drive will take us to the top of the plateau. We then get on the bikes and go down this fantastic winding paved road. The incredible journey ends after 13 km and over 1000 meters down. This tour is usually done in conjunction with the Torres beach weekend.

The wineries of Bento Gonçalves: One-day trip to an Italian immigration center located 150 km in the mountains to the north of Santa Cruz. In visits to winemakers in the country we will see vineyards and learn the Italian tradition of handcrafting wine. In the big wineries of Bento and neighboring towns we will learn how the best Brazilian wines are made, from the crushing of the grapes to the aging and bottling. At the end of each visit we will taste all kinds of wine.

The mountains of Gramado and Canela: The cities of Gramado and Canela are famous tourist spots in Rio Grande do Sul. Walk down thousands of steps into a canyon and get wet watching the Caracol waterfall splashing against the rocks. One-day trip in our van in the company of instructors. Portuguese spoken all the time.

Sinimbu - the German countryside: A short trip of 25 km into the rural area where the German language and culture are still alive. Transportation is in our van in the company of instructors. 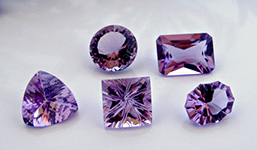 Brazilian gems: Much of the amethyst sold in the world comes from the mines of Rio Grande do Sul state and most of the factories that process and sell these stones are in the municipality of Soledade. A 140km-drive up the mountains to the plateau area will bring you to this small town where tens of factories and retailers of all kinds of stones will welcome you to visit their facilities. You can buy amethyst, citrine, opal, green amethyst, and agate at very attractive prices. 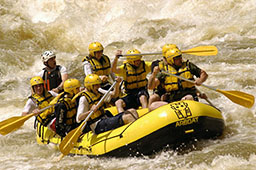 Rafting in Três Coroas: Fun and excitment in a rafting adventure. Day trip of 200 km in our van. Lots of language practice.

Climbing mount Botucaraí: Monte Botucaraí, is located 35 km away from the school. Bring water and a sandwich in your backpack and steam up the mountain. It's an easy climb. If you like trekking, you'll enjoy it. Transportation is in our van in the company of instructors.

Lagoa dos Patos - São Lourenço: Spend a weekend in bungalows at a lake beach 350 km away. Transportation in our van in the company of instructors.

Uruguayan border - Livramento and Rivera: In the sister cities of Livramento (Brazil) and Rivera (Uruguay), most of the people speak Portuguese and Spanish, and many speak Portunhol, a middle dialect between the two languages. This trip includes transportation over 400 km in our van in the company of instructors.

Our English, Spanish and Japanese speaking staff will provide complete expatriate services smoothing out language barriers and cultural differences. These services include immigration matters, driving licenses, schooling for children, health insurance, medical and dental consultations, accommodation recommendation, rental rate negotiation, full assistance during tenancy, translations and interpretations, airport transportation, etc. In addition to solving problems, these services can provide a lot of comprehensible input of the local language as well as experience with the local culture.

SEE OUR COLLECTION OF LINKS ABOUT PORTUGUESE

LINK TO A WEB SITE ABOUT BRAZIL
Comprehensive information for travelers including history, culture, etc.